Dr. Seuss' How the Grinch Stole Christmas by Chuck Jones for MGM originally aired with plugs for The Foundation for Full-Service Banks (A Full Service Bank) before the opening and closing credits. The plugs were cut out in subsequent airings at the sponsor's request due to the special's message contradicting their services. The accompanying music for the plugs is intact on the soundtrack of the special.

It wasn't seen again until 2013 when Robatsea2009, the same user who originally posted the sponsor plugs from "A Charlie Brown Christmas," uploaded it on YouTube. It was taken down due to a copyright strike and hasn't been seen in public since. Original video link: http://www.youtube.com/watch?v=jb6As7i5MrA

Only known advertisement from the company that mentions them sponsoring the special. Featured in the November 1967 issue of LIFE Magazine. 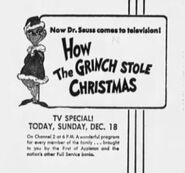 Advertisement mentioning the sponsor. From the December 18, 1966 edition of The Post Crescent.

The opening plug occurred between the Cat In the Hat productions logo and the opening credits. This narration accompanied it: "The Foundation for Full-Service Banks representing America's 14,000 national banks, state banks, and trust companies presents Dr. Seuss' How the Grinch Stole Christmas!."

The closing plug occurred between the ending of the special and the end credits. It was accompanied by this narration: "From the Grinch, and from Max, and from Cindy-Lou Who, and the thousands of banks, give or take one or two, that care for your savings and checking accounts and provide loans you need in all kinds of amounts. From the full-service banks that serve you all year, may this special season be full of good cheer. May your Christmas Day be so very, very, wonderfully, happily, joyously merry. The Foundation for Full-Service Banks representing America's 14,000 national banks, state banks, and trust companies has presented Dr. Seuss' How the Grinch Stole Christmas!."

The special sponsorship ads were reuploaded onto YouTube on January 6th 2021 by user Will C Wilson:

Soundtrack for the Ads