The film tell us the history of Copuchita the condor and his friends, a Mapuche puma named Manihuel, a rooster dressed up as a Chilean huaso named Ño Benhaiga and Clarita, a young woman.

This movie was financed by friends of the directors and their own families, they also got the support of CORFO: Corporación de Fomento de la Producción (Production Development Corporation) and Corporación Chilena del Salitre. The realization of this film was very rudimentary and was made in a workshop that both directors got in Lira with Marcoleta in Downtown Santiago.

In 1941, during a Disney goodwill tour in South America as part of the Good Neighbor Policy, Walt Disney visited Chile and saw the progress of the film and, amazed by their rudimentary animation tool, encouraged both filmmakers to continue their project, which gave them enough impetus to finish it and make it a feature-length film.

15.000 Dibujos finally premiered in 1942. While it was critically acclaimed on his own (mainly because it was the first Chilean animated feature film), it was sadly overshadowed by other animated films such as Fantasia and Pinocchio. After this, Carlos Trupp retrieve a copy of the film and, since then, the movie was never seen again.

In the late 1950's, filmmaker Edmundo Urrutia retrieved a little fragment of this film and incorporated it in his documentary “Recordando”, with this snippet being the only footage left of the film to date. That same fragment was later uploaded to YouTube by Kylie Trupp, the granddaughter of Carlos Trupp. In 2001, there were plans to restore the film, but they haven't been confirmed. A different fragment was uploaded to YouTube on May 2015. 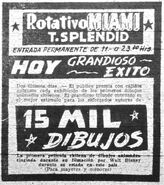