Sometime possibly in 1992, Klasky Csupo made a pitch-pilot for the Nickelodeon series Aaahh!!! Real Monsters. Not much is known from the pilot aside that The Gromble's name was The Womble and was eventually changed because of another series being called The Wombles was airing around the time of the show's first release.

The pilot followed the same storyline as the show's first episode "The Switching Hour", but it is unknown how many changes were in the released pilot and this unaired one. It is also unknown if it was a short 11 minute episode, or was like "The Switching Hour" and was in 2 parts.

The only footage is the low quality screenshot seen above. It can be assumed that the episode was made in lesser quality than the aired episodes.

-3 more images was just found and can be viewed below: 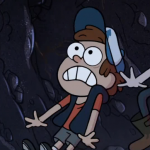