Angel is an English adaptation of the 1979 Magical Girl anime Lunlun the Flower Child (花の子ルンルン, Hana no Ko Runrun), produced by Ziv International in 1980. It was broadcast on HBO and covered the first two episodes of the original 50 episode series. The original Japanese score was omitted and it was replaced with a funky disco score by Mark Mercury under the name The Bullets. In 1980, it was released on a vinyl record by ZIV International and featured the first two episodes. According to the record, The first episode is titled "The Flower Child" and the second episode is "Angel and the Magic Key".[1] In 1982, it was released on VHS and Betamax by Family Home Entertainment under the name The Flower Angel and featured the third and fourth episodes according to YouTuber kenny Lauderdale from the comment section though this has to be opened via a Google+ account.[2] Five years later in 1987, it was released on VHS by Master Vision in the UK under the name Angel Cloud and once again featured the first two episodes. Twenty two years later in 2009, the two episodes were featured in a DVD compilation called Fairy Tale Adventures.

Along with the new score, the characters were renamed to Angel (Lunlun), Cathy (Cateau), Wendal (Nuveau), Melicia (Togenishia) and Ivan (Yabouki). However, according to the back of the 1982 Media Home Entertainment VHS and Betamax box, Cateau and Nuveau were named Kati and Poocho respectively.

As of 2018, it is unknown if Ziv International aired or finished the other 48 episodes into English when it aired on HBO and since VCR's weren't common back then, the English dubbed episodes are considered lost. However the Spanish, Brazilian and Italian dubs were based on this dub and the Marc Mercury score was left intact in these countries.

When it comes to it on the internet, the first episodes were uploaded on YouTube on January 5th 2009[3], but the channel was terminated and the videos were gone as a result. As of 2018, the episodes have not been uploaded onto YouTube, Dailymotion or Archive. However, some of these releases can be found on eBay [4] and Amazon.com. [5]

Most of the information of the dub can be found through a review by Anime Bargain Bin Reviews which can be found here. [6]

On June 7th, 2018, Facebook user TVFromThePast recently received the Angel Cloud VHS from eBay and was in the process of converting the VHS to a DVD. On June 10th, 2018, TVFromThePast announced that he would upload the full movie on his YouTube account or on his Facebook page in the coming weeks in July.[7] On August 3rd, 2018, he posted the full Angel Cloud VHS onto his Facebook account which can be found right here.[8] It was later uploaded to YouTube.[9]

Sadly in early 2019, the TVFromThePast's YouTube and Facebook accounts were terminated by multiple copyright claims and the full VHS tape of Angel was deleted. However, Archive user southpark456 saved the video and uploaded on the same day as the YouTube upload by TVFromThePast. [10]

On December 18th, 2019, YouTuber kenny lauderdale uploaded a compilation of "bee" bits from what is apparently the third episode of the ZIV International English dub of The Flower Angel.[11] He also confirmed that it all came from an obscure VHS that also has an English dub of the fourth episode. It is unknown if he'll upload it in full on YouTube, Archive or anywhere else. 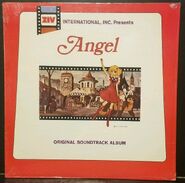 The front of the 1980 LP vinyl record by Ziv International. 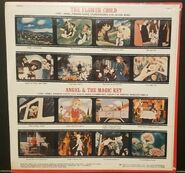 The back of the 1980 LP vinyl record by Ziv International.

The front of the 1982 US VHS release by Family Home Entertainment.

The back of the 1982 US VHS release by Family Home Entertainment.

The top spine of the 1982 US VHS by Family Home Entertainment.

The 1982 US VHS tape by Family Home Entertainment.

The front of the 1982 UK VHS release by Captive Video.

The back of the 1982 UK VHS release by Captive Video.

The front of the 1982 US VHS release by Media Home Entertainment.

The back of the 1982 US VHS release by Media Home Entertainment.

The 1982 US VHS tape by Media Home Entertainment.

The 1982 US Betamax release by Media Home Entertainment.

The front of the 2009 Fairy Tale Adventures DVD.

The back of the 2009 Fairy Tale Adventures DVD which contains the two Angel episodes.
Add a photo to this gallery

Retrieved from "https://lostmediaarchive.fandom.com/wiki/Angel_(Ziv_International_English_Dub)?oldid=151101"
Community content is available under CC-BY-SA unless otherwise noted.