Unlike the game released, Grunty’s Revenge, the GBC game does not take place mere months after the events of the first Banjo. Instead, it begins “a few years” after it, according to design documents recovered by a former Rare employee. Whereas Revenge features a tale about time travel, in which the newly resurrected Mecha-Grunty escapes to the past in order to stop the titular duo from ever meeting, the plot of Curse tried another approach.

The title would have opened with Mecha-Grunty confronting Banjo and his friends, placing curses on each of them (with the convenient exception of Banjo himself), as her reign of terror resumes. She starts by morphing Kazooie into a “monster” version of herself; a larger blue bird with allegiances to Grunty. Then, she transforms Bottles into a “funny creature”, as the documents describe it, before manipulating Mumbo‘s mind into making him attack Banjo. While the two fight, she takes off with Kazooie in tow.

The hero, however, is soon able to out-duel Mumbo, releasing him from the spell. A determined Mumbo then chases after the villainous witch, but to no avail. In a planned comedy set piece, the character inexplicably falls victim to all manner of bad luck: a black cat pounces on him, he runs under a ladder, before a mirror falls and smashes over his head. When Banjo catches up to him, he finds that Mumbo has been stricken with amnesia as a result of his injuries. His memory fails him, but he is able to recall that Banjo must collect several magical ingredients in order to relieve Bottles of his condition.

Banjo, however, comes to the realisation that he has forgotten his moves in the time since his last adventure. With Bottles incapacitated, he will need to seek out a new mentor to provide tutorials. Thus, he chases down Grampa Mole, the elderly father of Bottles. As development progressed, Grampa Mole would evolve into ‘Bozzeye‘, the NPC that teaches Banjo in Grunty’s Revenge during his visit to the past.

Banjo Kazooie: Grunty’s Curse featured two worlds that were ultimately dropped from the slate as time went on. These were dubbed ‘MohendraBanjo’, and ‘Fiery Furnace’ respectively.

MohendraBanjo was a stage set in and around the ruins of a jungle temple in the far East, but it was likely scrapped because Banjo Tooie's first level had a similar setting, albeit in the West.

Fiery Furnace, on the other hand, is described as a ‘dark industrial’ themed level filled with machinery and fire hazards.

While MohendraBanjo appears to have been scrapped fairly early on in the project’s life span, Fiery Furnace would make it considerably further. It even appeared in a leaked early prototype build for the GBA game, albeit in a largely unfinished state. Due to time and storage limitations, the team reduced Fiery Furnace in size and adapted it into a small part of the Freezing Fjord level, which was appropriately renamed Freezing Furnace as a result.

We have been able to ascertain that a plethora of enemies were explored during Grunty’s Curse, before being abandoned. In MohendraBanjo world, for example, the developers imagined enemies based around cobras and scorpions, in line with its far Eastern theme.

According to the design plans from October 1999, Rare had originally intended to include the ‘Bee Banjo‘ transformation that first appeared in Banjo Kazooie. This would have allowed players to fire stingers in a straight line to attack foes, as well as the ability of flight for an unlimited period to traverse larger platforming gaps.

Early in development, the team was exploring the possibility of ‘useless transformations‘ too. These were power-ups that served no other purpose than comedic effect; a hidden extra in the game to amuse players. Only one of them was slated to be added due to storage restrictions, but a number of them were being looked into:

There were considerations for a handful of secondary functions for transformations that were left on the cutting room floor:

The documents provided also reveal numerous stage names that were eventually changed over the course of development. Among these are ‘Cottage Farm’, which became ‘Cliff Farm’, ‘Soggy Bog Swamp’ was revised to ‘Bad Magic Bayou’, ‘Freezing Furnace’ was originally ‘Freezing Fjord’.

Although a playable prototype of the game in its GBC form is not to have ever been made, we have learned that the team of artists assigned to the project at Rare produced a multitude of digital art assets intended for one in 1999. These included sprites of some of the main characters, as well as designs for UI screens, like a pause menu. 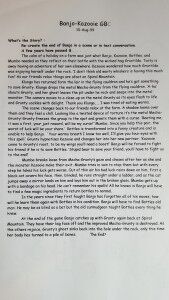 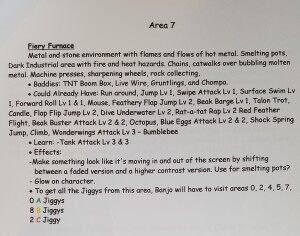 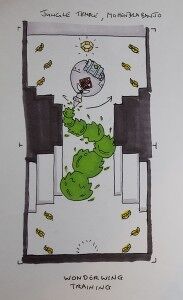 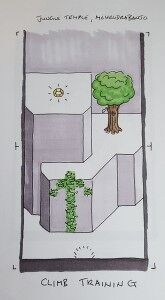 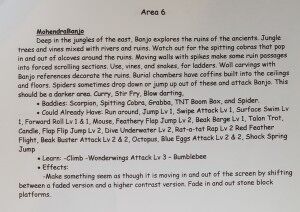 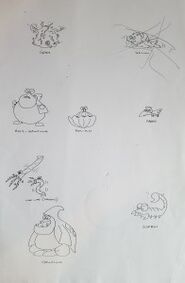 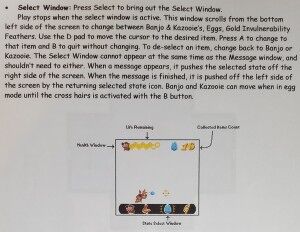 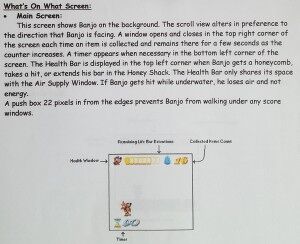 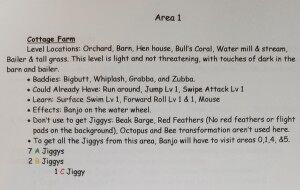 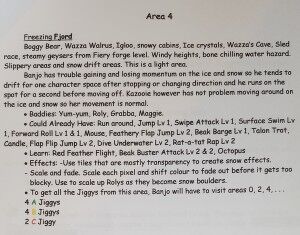 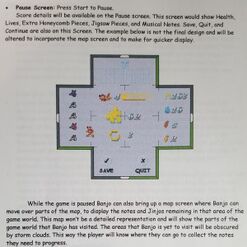 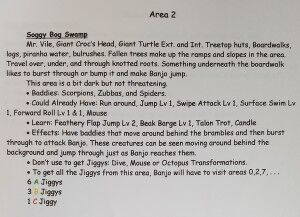 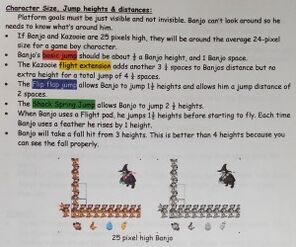 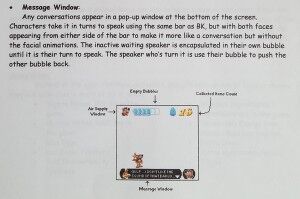