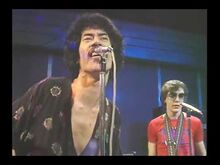 In 1976, the British progressive rock group Be-Bop Deluxe released their third album, Sunburst Finish. It spawned the group's only charting single, the #23 hit "Ships in the Night." Although the medium wasn't as commonly produced at the time as they were since the 1981 introduction of MTV, a music video was nonetheless made for the song. However, for reasons unknown, it was never released at the time, and not even known to exist. In 2018, however, Cherry Red put out two iterations of an expanded reissue of Sunburst Finish, with the 3-CD/1-DVD version including the "Ships in the Night" video on its DVD.[1]