Big & Small Is a kids TV series that aired on Cbeebies and Treehouse from 2008 to around 2014/2015. The show is about two friends, both with many differences, getting up to antics in their daily lives (etc. going camping, having a party) . There's also a mouse called Ruby, a worm in a apple named Twiba, and two frogs that hang out by the pond. Before Filming of the first series during 2008, the series went through many changes to become the show which got aired on TV. As Jamie Shannon (Puppeteer of Ruby and Twiba for the first 2 series) said in this interview, Big & Small had tests done with 2D animation, stop motion and puppets. 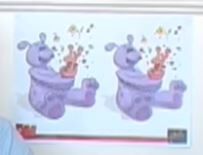 Currently there is no bit of it online, counting the 2D artwork made for the show. A rumoured bit of the 2D test that is online is seen in the video Plug-In Media released about making the game for the Cbeebies website, in which there is a photo of Big holding small where Big has toes instead of the stumps on his final design.

The only footage of the puppet test footage online is this video, in which both Big & Small have very different designs compared to their final designs. The video unfortunately doesn't have it's original sound and is only the footage with Big in it (but you can make out small in the background of the shots from 0:34 to 0:38 and 0:44 to 0:51)

Like the 2D test, there is nothing in the public eye about this test. A rumoured image of it is on Catlin O' Reilly's website, which shows a yellow Big model and a yellow Small model. 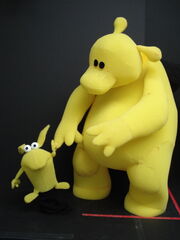