This page has been protected to prevent editing from non-admins for the following reason: Completed search

To request changes to the page use the talk page or the comment section.

Bob the Builder is a British animated stop motion children's television series that was originated in the UK by Keith Chapman and originally ran from 1998 to 2011. Featuring the voices of Neil Morrissey, Rob Rackstraw, Kate Harbour and many more. The series was a huge success. After the original series ended, a reboot ran from 2015 to 2018. But in 1997, a pilot episode was made to pitch the concept of the series to HiT Entertainment.

Bob the Builder was created by British artist Keith Chapman in the late 1980s. He got the idea to create Scoop by looking at a JCB digger on a construction site. Soon afterwards all the other machines were created. He then realised the vehicles needed an owner and Bob was created. Eventually, Chapman brought the project to HiT Entertainment, who developed the plans into a classic series. HiT formed HOT Animation and used stop motion animation for the show. The pilot episode was filmed in 1997 and a development deal was acquired from the BBC. The pilot episode had one set and two characters - Bob and Scoop (known as "Digger" in the pilot).

The pilot was produced in May 1997. It was never released on DVD. According to the website, the pilot was about 90 seconds long, despite it really being 130 seconds long. "HIT International required Ealing Animations to produce a 90 second pilot for Bob the Builder to pitch the idea to MIP C.O.M. We had a tight schedule of three months. I could see the idea had a lot of potential, but the script was too long. The script was re-written and production started. The designs for Bob the Builder took some time to crack, but, once they too were finalized, the puppet was made in Bristol by a company called The Puppet Factory. The one vehicle featured was produced and engineered by John Wright, also based in Bristol. He was highly recommended and had done lots of work on the Wallace and Gromit films. The sets, props and animation were done in-house. We delivered the goods and HiT presented their proposal, which was swept up very quickly. The pilot starts with Bob early one morning exercising in the builders' yard with his vehicle friend named Digger. They notice the gutter is blocked so Bob climbs up the ladder to fix it - and falls off. Luckily for him, Digger manages to catch him- perish the thought if he hadn't."

A person talked to the former designer of Bob the Builder, Curtis Jobling, about this pilot and said these things: Bob had very red lips in the pilot, Curtis didn't design it, the pilot was produced in 1997 (1 year before the actual first episode, "Pilchard in a Pickle", was produced), the pilot wasn't very good and nearly got the show cancelled, and Jobling claims he has it, too.

On December 22, 2020, after being sent a copy by the producer, Richard Randolph, the full pilot was found by kingmrharvey and was uploaded to archive.org. It is revealed that Bob and Digger were the only characters in the pilot, and Stuart Greenall was the voice of Digger in the pilot, though as he was redesigned as Scoop, Rob Rackstraw was cast as the character in the series UK dub, while Alan Marriott took the mantle for the show's US release in 2001. Neil Morrissey, however, retained the role of Bob from the pilot, and still held onto it when the series debuted. 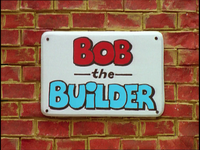 Prototype logo for the series. Only used in this pilot. 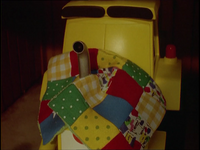 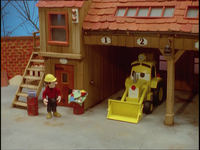 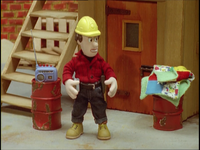 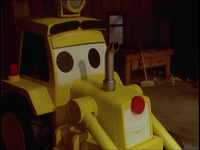 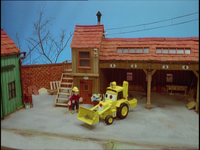 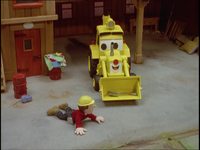 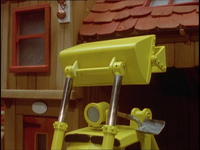 Digger gets hit in the head with a shovel that falls out of his bucket. 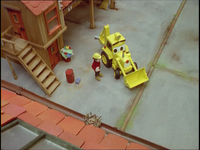 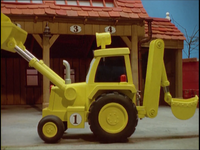 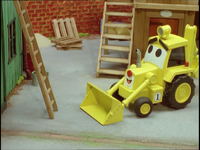 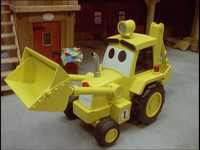 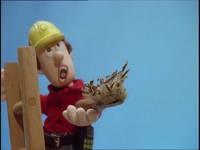 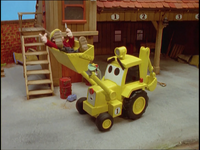 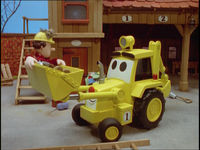 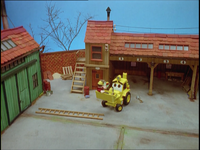 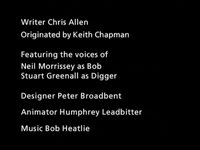 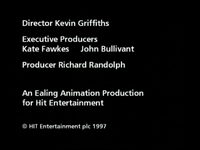 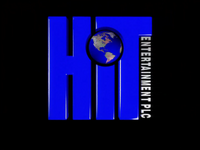 The HIT Entertainment logo used for the pilot,it was only seen in the pilot and was not commercially used, not even once the series was greenlit.

Digger's model (note: he is missing his eyebrows and backhoe)