Bunyan and Babe is an unreleased CGI/Live-Action film that was directed by Tony Bancroft and Jim Rygeil and written by Micheal A. Nickles (original story and screenplay) and Julia Wall (screenplay). Its production company was the Exodus Film Group (the same company that produced Igor), it was set to be distributed by MGM and was going to use the CGI/Live-Action film-making technique until 2006, when it became a fully animated film. Its cast included John Goodman as Paul Bunyan, Kelsey Grammer as Norm Blandsford, Jeff Foxworthy as Babe the Blue Ox, Bridger Zadina as Travis and Dorien Davies as Iris. It was set to be released sometime in 2011 but never showed up, and is now set on IMDb to be released in 2015.[1] According to a 2012 thefw.com article, the film apparently "got lost in the shuffle when MGM filed for bankruptcy".[2] Despite this, the film is still listed on Exodus Film Group's official website.[3] It was announced by Cinedigm in 2014, to be animated at Toonz Entertainment, but no more word on the film has been heard after that. It was finally released in 2017.

"12 year old Travis Barclay and his little sister Whitney are sent begrudgingly on a summer trip to visit their grandparents' farm in Delbert County. A greedy land developer, Norm Blandsford, has been buying up the little country town, running the hard-working residents off their land. After Travis has a run-in with one of Blandsford's men, he is chased into the forest where he stumbles upon a magic portal to the hidden world where Paul Bunyan lives. Paul has been in self-imposed exile for 100 years, ever since the advent of machines made his role in society obsolete and left him feeling of little value to the new world. Paul, reluctantly, escorts Travis back to the farm. But upon returning, Paul witnesses Blandsford's sinister plan. Suddenly filled by a long-forgotten sense of purpose, Bunyan and Babe, the blue ox, get wrapped up in a brand new adventure and together with the help of their new friends, Travis and Whitney, they save the town. Together they learn firsthand that you don't have to be big to do big things".

Poster from the film's website, boasting that it was supposed to be in 3D.

A promotional image from IMDb.

Another promotional image from IMDb. 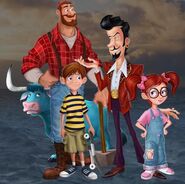 2D concept art of the film, that shows the live-action children from the poster in 2D.