The plot of the back cover of the 1991 VHS release says (It's hard to make out but here's what I've gathered - RetroGameFan9000, aka Ethan M. Nelson):

"Cap'n O. G. Readmore and his friends, Kitty Literature, Ol' Tome Cat, Wordsy, Lickety Page and Dog-Eared, hold their Friday Night Book Club meeting in an alley next to the public library. When members of the Book Club start to poke fun at some of the characters from their favorite fairy tales, the bookshelves part and Cap'n O. G. is confiscated by those some characters. Jack (from Jack and the Beanstalk) challenges Cap'n O. G. to take his place in the story. When the Cap'n accepts, the fun begins!"

Only VHS releases, a Korean DVD release, cels, a few newspaper ads, and voice actors for the episode exist and no footage of this special has been uploaded on the Internet. 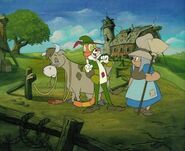 Press photo of the special.

Advertisement for a April 16, 1988 airing of the episode.

http://www.dvd.co.kr/shop/shopdetail.html?branduid=88742 A completed DVD collection from the Korean DVD website including the Jack and the Beanstalk.