Capitol Punishment is a cancelled video game project by famed programmer Al Lowe (who created the Leisure Suit Larry series). It would have been published by Sierra and released for the PC by the end of 1994.

It was meant to be an action game where the player would play as both Bill and Hillary Clinton riding in a canoe on a long river while avoiding many obstacles and enemies, usually based on rival politicians and the gameplay would involve various politics-related satirical imagery.

Al Lowe cancelled the game when he realized his idea looked better on paper than in execution, and due to technical limitations: after getting so many elements together, the game would "bogged down terribly".[1]

Apart from three different screenshots, no prototype or other media from the game has surfaced. 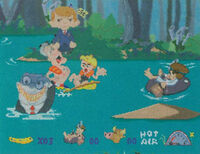