The 1995 animated/live action hybrid film Casper is notable for having many deleted scenes that have never seen the light of day. The only officially released scene to this day has been the unfinished deleted musical number “Lucky Enough To Be A Ghost” which has been included as a bonus feature on the DVD. The rest of the scenes however have yet to be released and have only been featured in trailers for the film, the script, and storybooks released around the time of the film’s debut. 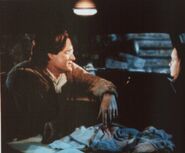 Kat and Dr. Harvey spending the night in their car.

Dr. Harvey and Kat in their car

The Ghostly Trio hiding in a suit of armour 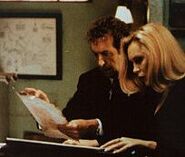 Dr. Harvey floating during the “Lucky Enough To Be A Ghost” scene

Kat reading the card on the flowers

Carrigan and Dibbs sitting at the harbour restaurant.

Carrigan and Dibbs sitting at the harbour restaurant 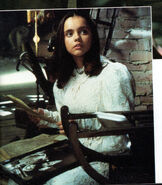 Kat looking at the photograph of the ghostly trio as humans

Dr. Harvey flying into the water on a rolling chair.

The Ghostly Trio on therapy couch