According to a comment from concept artist Ted Kim's DeviantArt account, the sequel, just like Overdrive, was striving to improve on many of the aspects that the public criticized about the first game. [1]

The existence and development of a sequel was first mentioned in a development article written by David Wu, a member of Pseudo Interactive. In the concluding paragraph, he stated:

Now that Cel Damage is out the door, PI's last monkey is off its back. We are published and moving ahead. There is plenty for us to look forward to now, not the least of which is Cel Damage 2, which we will deliver for next holiday season. We are excited about the prospects for Xbox and hope to continue to exploit its strengths with network and team-based play in our next game. [2]

The project went quiet soon after said article, without any further information on its development, which lead to some questioning its existence. After Pseudo's closure in April 2008, Ted Kim posted the game's concept art onto his DeviantArt page.

The concept art reveals that out of the ten characters in the first game, six of them (Violet, Dominique Trix, Sinder, Fowl Mouth, Whack Angus, and Count Earl) were set to return, and had all gotten redesigns. Other concept art showcases map ideas, ranging from a tropical island, to the inside of a volcano, to a futuristic laboratory.

Shortly after the concept art was posted, test footage of the game in early development was posted as well. The majority of said footage shows off the new models of Violet, Sinder, and Fowl Mouth, but two gameplay clips are present. The first one depicts Violet traversing on-foot, implying that there was going to be on-foot combat in addition to vehicle combat, while the second one depicts Violet driving underwater, later followed by a view of a shark, indicating that there was going to be an underwater map.

The reasons for Cel Damage 2's cancellation are currently unknown. Some sources have rumored that the North American publisher of the first game, Electronic Arts, purposely pulled the plug because of the poor sales of the first game, while a few sources have rumored that it was due to a lack of funding. It could also be speculated that it was cancelled due to the fact that it would have been overshadowed by the big-name kart-racers releasing in holiday 2003, Mario Kart: Double Dash!! and Crash Nitro Kart, although this isn't as likely of a reason for its cancellation.

However, with former Pseudo Interactive employees founding a new company, Finish Line Games, and re-releasing Cel Damage Overdrive on Playstation 3, PS4, and PSVita, a revival of Cel Damage 2 may be possible.

Violet was given a slightly risque design and an Egyptian-like haircut.

Dominique Trix was given a ponytail and an even more risque design than what she had in the first game.

Sinder was changed from a grotesque imp to a cute imp.

Whack Angus got a new coat of fur, and an emblem branded onto his left bicep. 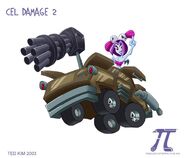 Violet in her car. 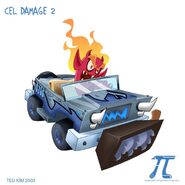 Sinder in his car.

An alternate version of the futuristic concept, with Dominique's car parked outside. 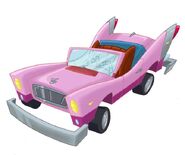