In 1994, director Kevin Smith's comedy about the life of two convienience store employees Clerks won him dozens of awards and basically kick-started his career. Even today, it is regarded as a seminal independent film. Sometime during 1995 (while Smith was making Mallrats), some TV execs decided to try and turn the indie hit into a television series. However, being as the film is very vulgar, the content was considerably toned down and new actors were brought in. Reportedly, Smith was not even informed of the filming of the pilot, and actors Brian 'O' Halloran ("Dante Hicks" in the film) and Jeff Anderson ("Randall Graves") both auditioned for parts, but were rejected. After seeing the result, both actors agreed they were happy with not getting the part. By all accounts, the pilot was a failed attempt to turn the movie into a network-friendly sitcom, with disastrous results. What became of the pilot after it was rejected is unknown.

An older internet site had a review of it, complete with pictures (said site has since disappeared, though it survives via the Wayback Machine) and one review IMDb (dated 2006) claims that 3 minutes of footage is available online if one is "lucky enough" to find it. According to another imdb user, Smith and company considered adding to the the 10th anniversary Clerks X DVD set, but couldn't even make it through a few minutes and shut it off. Some even claim Smith himself auctioned off the master copy. Whether it'll surface via bootleg or an official release has yet to be seen.

UPDATE: On jan/25/2015 an anonymous user uploaded the full pilot to vid.me 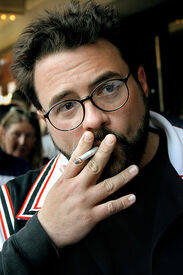 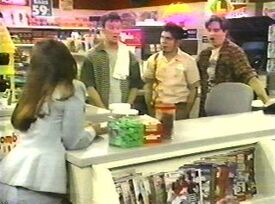 A screenshot from the pilot (taken from an archived version of the site containing the review).
Community content is available under CC-BY-SA unless otherwise noted.
Advertisement