Clone High, or Clone High U.S.A. is a Canadian-American adult animated television series created by Phil Lord, Bill Lawrence and Christopher Miller. The show focuses on a high school populated by clones of well-known historical figures. The cast includes adolescent versions of Abe Lincoln, Joan of Arc, Gandhi, Cleopatra, and JFK. The series also serves as a parody of teen dramas such as Dawson's Creek and Beverly Hills 90210.

There is an unaired pilot produced in 2001, written by Phil Lord, Bill Lawrence and Christopher Miller that was picked up as a series by ViacomCBS' music-oriented cable broadcast channel, MTV, running from 2002 to 2003. The pilot was screened to a public audience, but the full pilot never aired on television. There is unknown much about the unaired pilot besides concept art and logo to the series' early title.

As of 6/19/2021 there is no known footage of the pilot to exist online besides a single still image.

The last (seemingly) remaining imagery of the pilot to surface online, featuring an early JFK design and his parents. 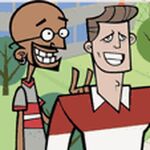 Early designs for Gandhi and JFK that are rather silly.