Corpse Eaters is a 1974 zombie horror-exploitation film written and produced by Lawrence Zazelenchuk and directed by Donald R. Passmore and Klaus Vetter (who also served as the cinematographer). Zazelenchuk owned the 69 Drive-In in Ontario where the film also had its initial run. The movie was locally produced within the city of Sudbury on a budget of thirty-six thousand dollars, raised by Zazelenchuk himself.

The simplistic story is indicative of many post-Night of the Living Dead/pre- Dawn of the Dead era zombie films. A majority of the action is conveyed through flashbacks and nightmare sequences. We start at a funeral home where the mutilated body of a young man is being prepared. From there, we shift to the young man, his sister, and their companions on a wild picnic. They decide on a whim to spend the night in a graveyard where they perform a séance raising the dead.

A majority of the gore effects were quite visceral. During the cemetery attack, one ghoul chops off a character’s hand with a shovel and another is stabbed to death. Because of this, the censorship board hacked out roughly five to eight minutes of footage from the original feature length film. This prompted the addition of a warning signal to accommodate squeamish audiences.

Even though the only confirmed screenings were in Canada, Corpse Eaters was purchased by Howard Mahler Films for a Stateside release (just as they did for Dario Argento's Deep Red). Reportedly, this arrangement was only for tax purposes and nothing of the sort came about even though there is a widely circulated one sheet poster crediting Mahler as distributor (seen below). The only way to acquire a DVD copy is through the independent seller, Encore Entertainment. The Encore Entertainment version clocks in at fifty-seven minutes and is transferred from a VHS source dated 1993.

Despite the lack of a trailer, YouTube user redleafKlassics, in 2009, posted a forty second video of clips from the movie. Beginning at the 17 second mark, the video (seen above) shows scenes that don’t appear in the Encore Entertainment version. These feature an unknown woman wolfing down a chicken dinner and a ghoulish character butchering a human corpse. So far, it is not known if these are from the longer cut or were spliced in from unrelated film sources. 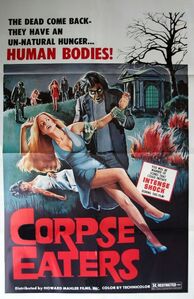 One sheet advertisement poster for the film, citing Howard Mahler Films as the distributor. 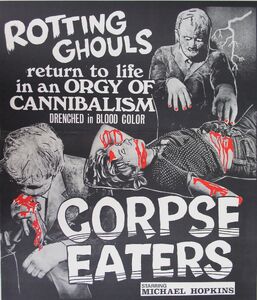 Alternative advertisement poster for the film.
Community content is available under CC-BY-SA unless otherwise noted.
Advertisement