Daibutsu Kaikoku (aka The Giant Buddha Statue's Travel Through the Country) was a 1934 Japanese kaiju film Directed by Eda Masayoshi.

The film itself was likely destroyed by the bombing by Allied forces during World War II or carelessness by the studio. A remake was released in 2018, directed by the grandson of the original lost film

Jurakuen Daibutsu (The Great Buddha) statue in Shurakuen Park comes to life, opens it eyes and then rises to his full 33-meter height, and embarks on a walk to save humanity.

After passing through tourist attractions in the Chukyo region, the statue flies off to Tokyo. A 1934 magazine article purportedly describes scenes in which the statue "strides over a train," "rests his head on a three-story building," and "makes geisha girls dance on his palm."

director branch justice Ichiro is Toa Kinema independent from is a work that was produced in 1934. It is a film work that depicts the subject of "The Great Buddha begins to move and walks around Nagoya" in a large-scale trick shooting. It is the first Japanese movie to be described as "a work in which a costume and miniature represent a huge character".

The films focus on special effects classifies it as a Tokusatsu film. The plot focuses on a giant Buddha statue (known in Japan as a "Daibutsu") 33 meters in height. It comes to life and tours the country, mainly seeing tourist sights, before flying into the clouds and going to Tokyo. Known only by some descriptions in magazines, the movie had a few notable scenes, including the statue resting while a geisha girl dances in his palm. It also had some color sequences, taking place in heaven and hell.

Planned to be the start of a multi-film series, the movie was only shown in a limited number of theaters and has since been lost. According to some people who worked on the film, the only copy they had got destroyed during World War II. The only known images are from a magazine article.

In 2018, a remake of the film, titled The Great Buddha Arrival, was released to Japanese theaters, with oversight from Edamasa's grandson. 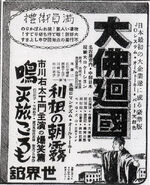