Drake and Josh is a sitcom that premiered on Nickelodeon on January 11, 2004, and ended its run on December 5, 2008 (with a TV movie). It was created by Dan Schneider and was a spinoff of The Amanda Show where Drake Bell and Josh Peck originally appeared. Although the first episode of the series is known to fans as the pilot, there was, however, a real pilot of the show.

This pilot was produced in 2001 and was made before Nickelodeon officially picked up the show. Not much is known about this except that it supposedly used the same plot as the first episode of the show, and Walter Nichols (Josh's Dad) was played by Stephen Furst instead of Jonathan Goldstein.

The pilot remained in obscurity until 2013 when Dan Schneider posted screenshots on his DanWarp Twitter account. Supposedly, he also posted a video clip to YouTube showing Josh's original dad, but that has since been made private and has not been mirrored anywhere else on the internet. Other than that, no other piece of info is available for this pilot and has yet to be released by Nickelodeon or by Dan Schneider himself. There are clips in the promo. Tommy2.net stated on their website that "Dan Schneider also posted the very first pilot for Drake & Josh on his YouTube channel. It features a different actor as the part of their Father, Walter. Fans of the series will definitely check out this rare clip!" This could've implied that at one point the unaired pilot video was available for viewing but was later privatized.

3/7 Another screenshot of Josh's dad. 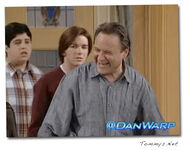 Retrieved from "https://lostmediaarchive.fandom.com/wiki/Drake_and_Josh_Unaired_Pilot_(2002)?oldid=150408"
Community content is available under CC-BY-SA unless otherwise noted.