On July 27, 1989, the Japanese video game company Nintendo released an RPG called MOTHER for their Family Computer System, a.k.a. the Famicom. Created by Japanese celebrity Shigesato Itoi, the game became a large hit due to a variety of factors, becoming notable for its unconventional elements. For instance, the game featured a modern setting instead of a medieval or futuristic one, and featured areas seamlessly put together in full rather than utilizing a traditional overworld. The game's popularity in Japan spawned two more sequels on the Super Nintendo Entertainment System & Game Boy Advance. It also motivated Nintendo of America to localize the game for American audiences on the Famicom's overseas counterpart, the Nintendo Entertainment System. Under the direction of Phil Sandhop, the localization team went into extensive detail to modify the game to be both child-friendly and understandable to an American audience in the same vein that it would be to a Japanese one. However, the project was eventually abandoned for economic reasons: the game would've been too expensive on shelves (due to the requirement of a save battery and planned inclusion of a strategy guide), the RPG genre lacked popularity in North America, and the game would've been overshadowed by the recent arrival of the SNES. By the time the project was cancelled, the localization work was 100% finished and would've been ready for release in 1991, even featuring some publicity in gaming magazines such as Nintendo Power.

Eventually, a prototype ROM of the lost translation was found and circulated on the internet, where it was found to contain a plethora of changes from the Japanese version. Among others, the game removed or changed violent, sexual, and copyright-infringing content and altered some areas of the game to make navigation easier. A full list of changes to the game can be seen here[1].

The localization project was not in vain: according to Sandhop, the project motivated Nintendo of Japan to design games with an international audience in mind, to minimize localization efforts in the future. Nintendo would even go out of their way to sometimes pre-localize a game after its Japanese release before sending it to their international divisions. Eventually, the English ROM was re-translated into Japanese and re-released on the GBA as part of the Japan-only compilation cart MOTHER 1+2. The 1990 English ROM, however, didn't see release until June 24, 2015, when it was released as EarthBound Beginnings on the Wii U's Virtual Console. 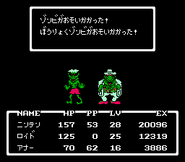 Screenshot of a battle from the Japanese version 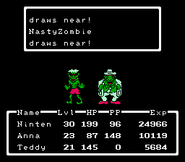 Screenshot of a battle from the translation; note the replacement of the Nasty Zombie's gunshot wounds with a white tie.

Promotional material for the cancelled English release in a 1991 issue of Nintendo Power
Community content is available under CC-BY-SA unless otherwise noted.
Advertisement