Earthworm Jim is a 2D side-scrolling platformer, created by Doug TenNapel and developed by Shiny Entertainment. In 1995, an animated series was created and aired on Kids’ WB!, which would go on for two seasons. Before this, a pitch pilot was made, featuring a slightly different design for Jim himself. Information on the pitch pilot is scarce, with very few sources coming forward over the years to provide information about its development. Due to this, the pilot remains partially found with clips and promotional stills giving us some insight into the development process of the cartoon series.

The full contents of the pitch pilot are currently unknown at the time of writing. Judging by the time stamps provided in magazine scans and promotional stills, some have come to the conclusion that the pilot is only a minute long. However, this is just speculation and the current length of the pilot is unknown.

Clips of the pitch pilot have been used to promote the Earthworm Jim cartoon series and are featured in promotional bumpers for the show. From what is shown, there’s very little dialogue. However, Jim’s voice more closely matches that of his video game counterpart of the time. Characters that would end up not appearing in the final cartoon series, such as Major Mucus, are shown in the pilot for a brief amount of time.

In June of 2018, Twitter user @AWDtwit provided a magazine scan with images of the pilot with the following caption:

A user in the same Twitter thread claims to have seen the pilot aired on the television network TCC, claiming that the pilot was only a minute long. However, with no other sources to confirm this claim, it’s currently unknown if this is factual.

A video by the YouTuber “TheElecPlays92” would reveal the existence of a VHS screener for the Earthworm Jim cartoon series, containing footage of the pitch pilot. According to "TheElecPlays92", the VHS screener was given to various video game news publication journalists to report about the cartoon series. He would go on to say that he would provide more information about the VHS screener in a separate video. However, this has not come to fruition, and there are many questions that still remain unanswered.

The whereabouts of the Earthworm Jim pilot are currently unknown as of the time of writing. Efforts have been made to contact individuals who could possibly have a copy of the pilot, but no new footage has surfaced. It’s possible that another copy of the VHS screener could exist, but it’s debatable if a collector or current owner of the tape would wish to upload the contents online. Currently, the pilot remains partially found. 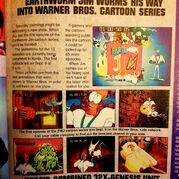 End Card from the pilot
Add a photo to this gallery

Retrieved from "https://lostmediaarchive.fandom.com/wiki/Earthworm_Jim!_-_Lost_Unaired_Test_Pilot_-_1995_-_Kids%27WB!?oldid=196391"
Community content is available under CC-BY-SA unless otherwise noted.