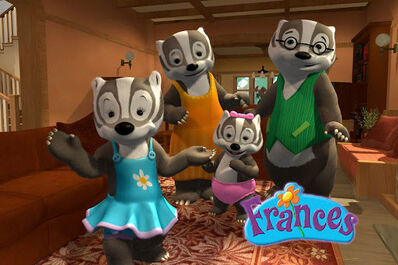 "Frances" (also titled: "Frances: Taking Chances") was a preschool kid show that ran from 2005-2009, owned by HiT Entertainement and The Jim Henson foundation. The show is based off a book that was released in the mid' 90's titled "Bedtime For Frances", which was a big success for children.

Despite the book being successful, The show had very little success, running for very little time and resulting in the series only having 6 episodes. The show started airing on PBS Kids Sprout in 2008 apart of the block "Summer Fun Fridays". Unfortunately, no airings have been uploaded anywhere however. The show also aired on TLC in Spain and Discovery Kids in the US from 2005-2007 and 2005-2006, respectively.

Advertisements of the show can be found in most HiT Entertainment releases from late-2005, such as Thomas & Friends - Calling All Engines (2005).

Retrieved from "https://lostmediaarchive.fandom.com/wiki/Frances_(Lost_TV_Series/Episodes)?oldid=177200"
Community content is available under CC-BY-SA unless otherwise noted.