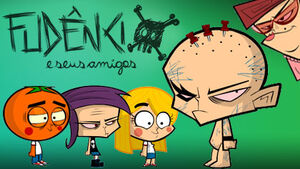 Fudêncio e Seus Amigos (unofficial English title: Fuckerson and his Friends) is a Brazilian adult cartoon series aired from 2005 to 2011 on MTV Brazil. Of the cartoon's 163 episodes, 143 are currently available on YouTube, but the remaining 20 are lost.

The cartoon follows a group of nine-year old school friends but explores several adult themes, such as violence and sexuality, and contains profanity.

The following is a list of the cartoon's twenty lost episodes by order of original air date.

Retrieved from "https://lostmediaarchive.fandom.com/wiki/Fudêncio_e_Seus_Amigos_lost_episodes?oldid=189568"
Community content is available under CC-BY-SA unless otherwise noted.