Despite its limited run, the show still had a bit of merchandise: an audio book with a record (called a "phonomanga") and at least one coloring book. 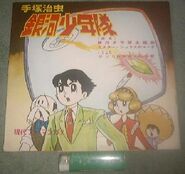 Retrieved from "https://lostmediaarchive.fandom.com/wiki/Galaxy_Boy_Troop_(Lost_1960s_Puppet_TV_Series)?oldid=63545"
Community content is available under CC-BY-SA unless otherwise noted.