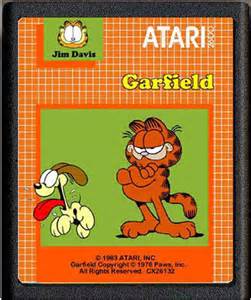 Garfield was a cancelled game set for release for the Atari 2600. The reason it was canned was because of the video game crash of 1983.

In the game Garfield starts off by hopping around the fence and eating burgers. Next he ducks as flowerpots are thrown at him while he's on the fence.

Next he must cross the top of the roof to get to the other side of the yard, but he must watch out for Odie who likes to sneak up on the cat unaware. He must jump on top of a dog pound of Odies eating burgers and avoiding flowerpots. Finally he has to rescue Nermal who's hanging on for dear life from the roof. Due to the game being unfinished, the game instead of ending just starts over but with the screens being in a different order. 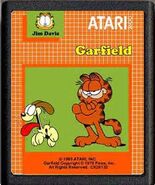 Gameplay
Add a photo to this gallery
Retrieved from "https://lostmediaarchive.fandom.com/wiki/Garfield_(Atari_2600_game,_circa_1980%27s)?oldid=150045"
Community content is available under CC-BY-SA unless otherwise noted.