gello boi 2.0 is an american YouTuber that has dealt with drama and controversial stuff and had a difficult life for the past 3 years. There's been videos that've been either been taken down, deleted, or privated. it is unknown if some videos exists.

UPDATE 5/23/21: some screenshots of some videos are found. 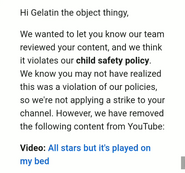 one of his videos being removed

WHY DID YOU STOPPED THE MU- screenshot 1/2

a screenshot of the "SQUEEZE" video

a screenshot of "bonnie and his friends sees something disdurbing" video

a screenshot of the "blue dog explains the fnaf lore" video

a screenshot of the "WTF IS THAT ON YOUTUBE" video
Community content is available under CC-BY-SA unless otherwise noted.
Advertisement