I found the 1996 script on eBay. Here's a gallery to read its true version. 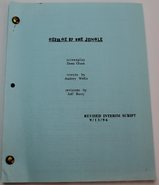 George of the Jungle has been a complete success in the box office for theaters to be released in July 16, 1997, but there are some missing scenes & footage where there rough cuts from the film & some deleted scenes because of some images we found the Disney wiki. So we would ask the director, Sam Weisman to see if he can find all the lost footage & the composers, Sheldon Allman & Marc Shaiman to be rehired to reset the music score in different (or still in the same) order & some new score treatments to go along with it. Even with the editor, Kent Beyda who will be an honor to release the director cut, once he had found all the footage & put them all together to make this film into a true actual version. Please consider signing in this petition to get the release of the director's cut of George of the Jungle as our goal to reach. (Even if you are fan of this film)

Release The Director's Cut of George of the Jungle

Retrieved from "https://lostmediaarchive.fandom.com/wiki/George_of_the_Jungle_(1996_Script)?oldid=137267"
Community content is available under CC-BY-SA unless otherwise noted.