GoldenEye 007 XBLA is an unreleased and unfinished GoldenEye 007 Xbox Live Arcade remake. It was in development by Rare Ltd. from 2007 to 2008, and was ment to have HD converted graphics, online multiplayer mode and split screen mode. Very little is known about this, besides from the screenshots. It's was delayed several times until it's cancellation for unknown reasons. It was rumoured to be because of the high quality and capacity in such a game. So much attention given to Rare was to much to handle. There is more info at Rare Thief, with game footage.[1] It's possible that the engine used for this Goldeneye remake was later reused for the Perfect Dark XBLA Remake. There are some more images at Unseen64.

In January 29, 2021, a longplay[2] of the XBLA version was uploaded on YouTube by the user Graslu00, who released a build of the game a few days later.

A screenshot of the game with an explanation 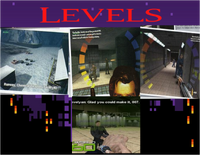 Retrieved from "https://lostmediaarchive.fandom.com/wiki/GoldenEye_007_XBLA_(Found_Cancelled_Remake)?oldid=193656"
Community content is available under CC-BY-SA unless otherwise noted.