"Vulvagia", according to a few select accounts by HORSE the Band members Nathan Winneke and Dashiell Arkenstone, is an unreleased B-Side track that was recorded during the creation of their 2007 album A Natural Death. According to a forum post made by Winneke,[1] (incidentally, in the same thread in which he mentioned the Ghost EP), he confirmed the existence of the track, stating that it was based upon the dragon Volvagia, from The Legend of Zelda: Ocarina of Time. It has never been revealed as to why exactly the track didn't make it to A Natural Death, and there is scarce other information available about it anywhere. 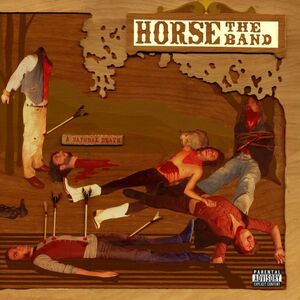 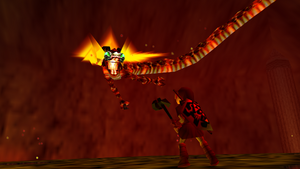 Volvagia, as he appears in The Legend of Zelda: Ocarina of Time.

Retrieved from "https://lostmediaarchive.fandom.com/wiki/HORSE_the_Band_%22Vulvagia%22_(Unreleased_2007_%22A_Natural_Death%22_B-Side)?oldid=20469"
Community content is available under CC-BY-SA unless otherwise noted.