In 2004, an 11-minute pilot was created for the series. Unlike the main Handy Manny series, which was animated by Two Presidents Productions and Nelvana, the pilot was animated by DKP Studios (now known as Jam Filled Toronto). The pilot also used standard 3D animation instead of cel-shading, and had more simplistic sets. The only video footage of this pilot can be seen in a demo reel from DKP Studios' official website. Aside from a resume of CG artist Kyran Kelly, who directed the pilot, little information can be found, like here, https://www.imdb.com/title/tt0875911/fullcredits, Marilyn Sadler confirmed some plot details in the pilot. In the pilot Manny worked outside of his house instead of having a workshop and Mr. Lopart was Manny's nextdoor neighbor. No more information is known about the pilot. Another screenshot of the pilot was found on a TV Guide magazine from 2005, that revealed Manny's pilot design, which Peebs posted on his Instsagram post; https://www.instagram.com/p/CTsucThr9q2/.

Mr. Lopart's design in the pilot.

The tools' designs in the pilot. 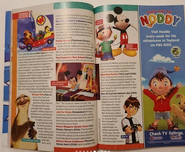 Manny's pilot design (next to Mickey Mouse at the top right-corner).
Community content is available under CC-BY-SA unless otherwise noted.
Advertisement