Preliminary box art. The final box would have been a replica of the puzzle box from the film. 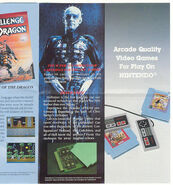 Advertisement promoting the various features of the game. Note the mention of Sega Genesis and Atari Lynx versions.