Him is a 1974 movie loosely referencing the life of Jesus Christ that heavily features hardcore gay pornography. It was confirmed as being played at the 55th Street Playhouse, New York (a theatre specialising in hardcore gay films) from 27 March to 23 May 1974.

Despite the name and implication, the film's central character is not Christ himself, but rather a man that has an erotic obsession with Christ. It first received mainstream attention in 1980, when it was featured in the book The Golden Turkey Awards, for which it won "Most Unerotic Concept in Pornography". On the very next page of the book was the quote "Over 425 actual films are described in this book, but one is a complete hoax. Can you find it?", leading many to believe that Him was a hoax, and in fact nonexistent. However, it was soon discovered that the fake film in the book was Dog of Norway (which featured a "screenshot" that was in fact a photo of one of the editor's pets), and not Him.

Several fragments relating to the movie have been uncovered, such as a few advertisements and reviews, as found through online newspaper archives. Additionally, the identity of the late actor portraying Jesus was uncovered in a blog post,[1] (thanks to correspondence from his former partner Vinny Parrillo), that being of New York muralist Gustav Von Will (aka Tava). A photo of Von Will dressed as Jesus for the film was also provided to the blogspot page by Parillo.

Although the film's existence has been undeniably proven, no actual footage has ever been seen since 1974. It was possibly banned due to its sacreligous concept. 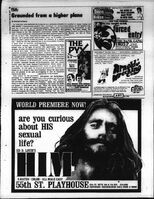 Newspaper review for Him.

Retrieved from "https://lostmediaarchive.fandom.com/wiki/Him_(lost_gay_pornographic_Jesus_film;_1974)?oldid=142116"
Community content is available under CC-BY-SA unless otherwise noted.