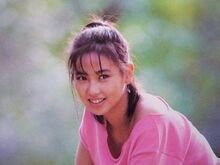 Yasuko Endo (遠藤康子) was a Japanese model, actress and upcoming pop idol, set to release her first single in May 1986. She committed suicide on March 29, 1986, and her debut single was never released.

IN THE DISTANCE Credits

The single, possibly called "IN THE DISTANCE ~Haru ka Kanata~" (IN THE DISTANCE～はるか彼方～), was set to be released during May 1986, under the label Canyon Records. The master recording of the single was under the possession of RIV.STAR RECORDS (リバスター音産株式会社), however it was most likely destroyed after her death.

The two songs featured on the single were "IN THE DISTANCE" and "Telephone". No details are known about Telephone, apart from Yasuko's mother claiming that the lyrics were very similar to things written in Yasuko's private diary, and that Yasuko was very attached to the song.

The producer and composer of the song, Tetsuo Sakurai, released a cover of the song in his 1986 album "DEWDROPS". This means while the lyrics of "IN THE DISTANCE" are online, the lyrics for "Telephone" are still lost.

On March 29, 1986 at around 5:40pm, Yasuko Endo was meeting with her mother and management company in a local coffee shop about her debut single. The discussion ended at around 7:10pm and Yasuko continued talking with her mother until 7:30pm. She then reportedly told her mother "Mama, I'm sorry", and entered the building next to the coffee shop. She jumped from the roof of the seven story building, where she was later found by a passer-by at 8:34pm. She was taken to hospital, however she was pronounced dead at 9:30pm.

It is rumoured that the reasoning behind her suicide was due to her having a relationship with a man, which her mother and management company did not approve of, however both parties denied this claim. Another theory is that she was overwhelmed and overworked from the pressure of her debut and could no longer handle it.

The first late morning in a long time
With a cup of bitter coffee in hand
The rusty terrace after the rain
News Paper fallen Air Mail
They have been friends since then, in New York
I've been living in oblivion for a while now
How are you doing, following his typical clichés?
I can suddenly see the color of the wind on the day I forgave her for her love
I'll be alone for a long time, even now, with my pride
I'm not going to be able to do it