I Have No Mouth, and I Must Scream is a horror/science-fiction adventure game that was released in 1995 on PC, developed by Cyberdreams and Harlan Elison. It is based on Harlan Ellison's short story of the same name. The game has a reputation of being disturbing and depressing, but there is evidence that shows that it was even more so before official release.

The story is set a hundred of years in the future. All of humanity has been killed by a mad, extremely powerful and hateful sentient computer called AM (Allied Mastercomputer). He has kept alive five people that he has tortured for all this time. One day, he decides to send them in virtual worlds where each one of them is forced to confront their tormented past or their inner flaws.

They are Gorrister, the suicidal trucker who is remorseful about having driven his wife mad; Benny, the hideously deformed soldier; Ellen, the female engineer who has a phobia of the color yellow; Ted, the paranoid young estate agent; and Nimdok, the elderly German doctor.

Evidence of the original uncut scenes

In it, they show scenes that don't appear in the finished product:

It is possible that some of these scenes were deleted in fear of causing controversy, for pacing or atmosphere reasons. Whatever it is, a playable version of this game with the extended scenes has never been found or mentioned. 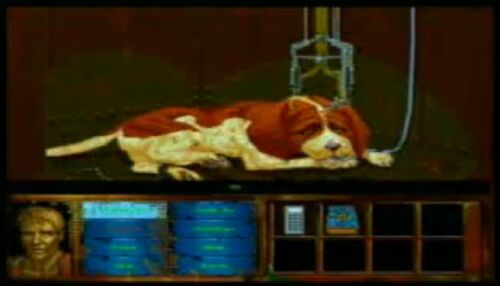 Puppy absent from the final version of the game.
Retrieved from "https://lostmediaarchive.fandom.com/wiki/I_Have_No_Mouth,_and_I_Must_Scream_(Uncut_Original_Version;_Early-to-Mid_90s)?oldid=197756"
Community content is available under CC-BY-SA unless otherwise noted.