Jeffrey Cat: Claw and Order is an animated pilot created by Mark O'Hare (known for creating the comic strip Citizen Dog) for Cartoon Network, produced by Slappy Pictures. It was one of eight Cartoon Cartoon shorts exclusive to the Cartoon Cartoon Weekend Summerfest on August 23, 2002, where it lost to Lowbrow (later known as Megas XLR).

The pilot, titled "All Dogs Don't Go to Heaven", sees pet investigator Jeffrey Cat solving a case involving an innocent dog that has been accused of attacking a neighbor. It is the only Summerfest pilot that has not made its way online. The only found pieces of footage are a second-long excerpt from a Summerfest promo and pre-production animation and artwork provided by director Mike Dietz. 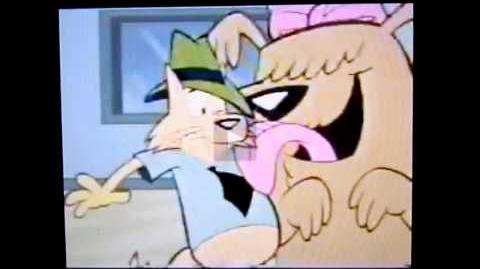 Character model sheet
Add a photo to this gallery
Retrieved from "https://lostmediaarchive.fandom.com/wiki/Jeffrey_Cat:_Claw_and_Order_(2002_Rare_Cartoon)?oldid=49828"
Community content is available under CC-BY-SA unless otherwise noted.