Kimba the White Lion (Japanese: ジャングル大帝) is an anime series created by Osamu Tezuka that originally aired on Fuji TV from 1965-1966. Numerous dubs have been produced, but many of them are difficult to find.

This second English dub of the Kimba series was produced by Landmark Entertainment Group Inc. and recorded in Toronto, Canada by Zaza Sound. It broadcasted all over the world and has been used as a basis of many newer dubs. The last year to air this version of Kimba in the US was in 2010.

The first twenty episodes were released on home video and DVD In the US, Canada and Australia. [[1]] The only possible lead to find the ladder episodes is through home-recorded TV airings. However, the total number of episodes produced is unknown due to poor documentation of the dub and sources.

A Catalan dub of the series called Kimba, el lleó blanc has previously aired on Canal Nou Dos. Not much is known about this dub. The only material that has resurfaced are a few songs and a very short clip from episode 51.[1]

In 1989, a Finnish subtitled version called Kimba valkoinen leijona was distributed by Tamline Ky and released on VHS in Finland. It subtitled the Italian dub. Each cassette was 45 minutes long and contained 2 episodes. No footage has been found.[2][3]

It has been claimed that there is a Hebrew dub of the series called קימבה האריה הלבן. No evidence of its existence has been found so far. Currently, the earliest known reference to this dub is a 2008 page on a Kimba fansite.[4] It's unclear where this information came from.

کیمبا شیر سفید is the Persian dub of Kimba the White Lion. It previously aired on IRIB TV2.

Кимба is the Russian version of Kimba the White Lion. It's unclear whether this is a dub or a voice-over. It was released in 2000, and could be purchased from Arena Video, but the website has shut down. The only thing that remains is a low quality picture of the front cover.[5]

คิมบ้าเดอะไลอ้อนคิงส์ is the Thai dub of Kimba the White Lion. Not much is known about this dub. It's unknown if it ever aired on TV. It was released on VCD in 2002 by a company named SEIGA. At least 5 volumes were released, but volume 1 is unaccounted for, and volumes 3-5 haven't been uploaded online. 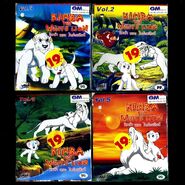 Kimba the White Lion Thai VCD Vol.2
Add a photo to this gallery

Retrieved from "https://lostmediaarchive.fandom.com/wiki/Kimba_the_White_Lion_(various_dubs)?oldid=162088"
Community content is available under CC-BY-SA unless otherwise noted.