King Koopa's Kool Kartoons was a local live-action Bozo the Clown-esque spin-off of DIC Entertainment's Super Mario Bros. Super Show! hosted by King Koopa (portrayed by Christopher Collins in 1989 and later Pat Pinney in 1990, both in a rubber costume and modified appearance-wise to be more belivable for a live-action show; the latter would go on to play Painty the Pirate, as seen in SpongeBob SquarePants' opening sequence.) who would interact with a live-action child audience, showcase cartoons from the 1920s and 1930s that were in no way related to the Mario franchise and give away prizes such as certificates, power gloves and such other NES accessories at the end of the show.

It was distributed by Fox Television Stations and was aired in Southern California on KTTV Fox 11 in the holiday season of 1989/1990 in the timeslot of after-school afternoons and in the running time of 30 minutes, before being later reaired on The Children's Channel in the United Kingdom. It was done so to possibly gauge the show's popularity before expanding but it unfortunately stopped production after only one season.The format was similar to The Super Mario Bros. Super Show! in that after the introduction the show would transition to the live-action set with King Koopa and a child audience called King Koopa's Troopas, and the shows tech crew was dressed similarly to them when they would appear. The credits of the show would play over another pre-recorded segment.

Despite its animated counterparts receiving much success, this show in particular hasn't been seen since its initial debut, let alone outside of Southern California and very little of it has resurfaced to the internet or rereleased to DVD, with the very few who did know about it, (what with its limited run and appearance), not thinking it was any good. In a 2005 RetroJunk article by MIaconoSP, he called its cartoons and King Koopa segments not very good and unfunny and cheesy respectively (similar complaints to DIC's other Super Mario productions), and cited that the live-action even seemed unrehearsed.[1] In the same article, he also claims to have recorded two episodes of the show, but has evidently never uploaded them (and it's unknown if he ever will, especially since he seems to have vanished off the internet since late 2006). Like The Moxy Show, not a single full episode of King Koopa's Kool Kartoons has ever shown up online. 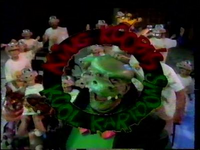 A screenshot from the title sequence. 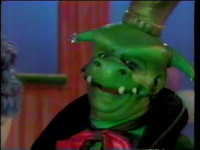 Another screenshot from the show of the titular character. 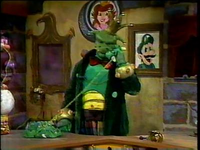 A screenshot of King Koopa making a phone call. 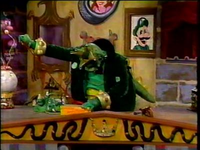 Another screenshot of King Koopa at centre stage. 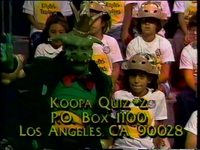 A screenshot of King Koopa in the audience with an address to presumably send to.

Retrieved from "https://lostmediaarchive.fandom.com/wiki/King_Koopa%27s_Kool_Kartoons_(1989-1990_Live-Action_Super_Mario_Bros._Super_Show_Spin-Off)?oldid=126277"
Community content is available under CC-BY-SA unless otherwise noted.