With the impact her life and suicide left, now with "Leelah's Law" in the process of being signed and banning Transgender conversion therapy in the United States, the story of Leelah Alcorn needs little introduction. On January 6th, 2015, her blog along with her suicide note post had been removed from Tumblr upon her parents' request. As it stands, supporters of Leelah have archived her suicide note and a few selfies and drawings done by her in the form of screencaps, however the rest of the content from her blog, including posts leading up to her suicide note, are now seemingly lost.

EDIT 4/24/2015: Shortly after this page was posted, MithrandirAgain has supplied multiple archives of her blog. Thanks!

(WARNING: This page contains graphic imagery reblogged by her shortly before her suicide note.) 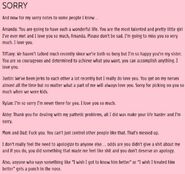 Add a photo to this gallery
Retrieved from "https://lostmediaarchive.fandom.com/wiki/Leelah_Alcorn%27s_Blog_(Lost_2014_Tumblr_Webpage)?oldid=159839"
Community content is available under CC-BY-SA unless otherwise noted.