in 2003 limp bizkit was at mtv metallica icon the original was uploaded getting over 11 million views https://youtu.be/Q2F5piurv-0 all the performances were from snoop dogg,limp bizkit,sum 41,korn and more, since this was on live televison it was censored, and an uncensored version has never serficed. 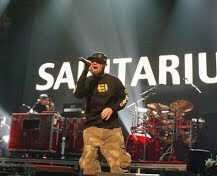 fred durst, front man of limp bizkit says he has A copy of the uncensored version and said he was going to release it. it is yet to be released. Mtv might have a copy too somewere in there archives, in the uncensored audio. he says "everybody in those fuckin' seats stand the fuck up!" It Has not been Proven To Exist.

the uncensored audio is somewere in the possetion of limp bizkits manager.