London After Midnight (known in the UK as The Hypnotist)was a 1927 silent mystery film written and directed by Tod Browning, and starring Lon Chaney. The plot involved Inspector Edward Burke (Chaney) investigating the murder of Sir Roger Balfour in London.

After finding a suicide note, the case is closed and seemingly forgotten, however, 5 years later the Balfour residence is re-inhabited by a man in a beaver-skin hat, with dark sunken eyes and fangs. People begin to wonder if it is Balfour back from the dead, although in fact, it ends up being Inspector Burke himself in disguise, for the purpose of catching the murderer.

The film is one of Lon Chaney's best make up looks with a mouth of shark like teeth and wires to make his eyes look sunken yet hypnotic. This film was also the only one to show him at work with his famous make up case.

The last known surviving copy of this film was destroyed in the 1967 MGM Vault fire, and as such, it is today one of the most sought after lost films of all time. One reason the film's rediscovery is needed is because Chaney was going to play Dracula in the movie of 1930, however he died before work began and this film might of shown what of been an example of what might of been.The film was remade into a talkie in 1935 by the same director, titled Mark of the Vampire. Additionally, in 2002, a 45 minute reconstructed version of the film was released, using still photographs and the original script. These still photographs, as well as several advertisement posters, are the only known surviving visual evidence of the film. 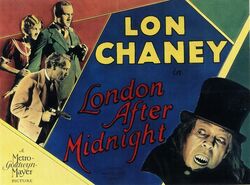 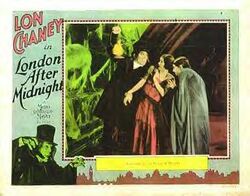 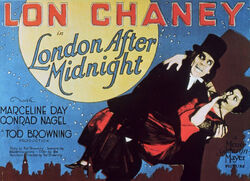 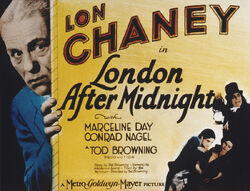 Retrieved from "https://lostmediaarchive.fandom.com/wiki/London_After_Midnight_(1927_Lost_Silent_Film)?oldid=122764"
Community content is available under CC-BY-SA unless otherwise noted.