There's Some SML Movies are Lost and Scrapped.

Jeffy's SuperPowers! is an unreleased SML Movie of SuperMarioLogan. It was mentioned in SML Reacts: Jeffy's Mistake, Logan didn't release it because it was really crappy and couldn't able to get the train scene where Jeffy stops the train. A picture of Jeffy in Pooperman costume can be seen on Logan Thirtyacre's Instagram.

Jeffy ended up in a huge accident, and miraculously recovered with toilet-related superpowers. 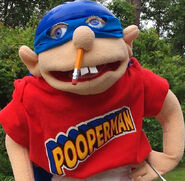 "Goodman's House!" is an unreleased SML Movie of SuperMarioLogan. The only evidence is a picture of Bowser Junior and Richard standing front of Richard's money bathtub can be seen on Logan Thirtyacre's Instagram back in July 2019. It is unknow why Logan didn't release it or the video might be still in his flies.

"Bowser Junior The Spiderman" is an unreleased SML Movie of SuperMarioLogan. It was mentioned in Chilly's video SML Jeffy's Clone (We Need Your Opinions!) that Logan made the video a few years ago where Junior was Spider-Man. He got bit by Terrence and he became Spider-Man and Logan never uploaded it.

Bowser Junior gets bitten by Terrance and became Spider-man.

"Bowser Junior's Cellphone 2" is a video SuperMarioLogan made, but wasn't uploaded due to Logan Thirtyacre thinking it was a bad video. Logan mentioned this in an interview with Dabhdude (who was glad this video was never released).