Lost Where Do They Go Episodes on Babyfirst TV on Youtube

Young viewers are introduced to the concept of sorting in “Where Do They Go?” A gameboard opens at the beginning of each episode and three objects are presented. Through audio-visual cues, toddlers learn where each object belongs on the board according to a characteristic such as color, shape, size or purpose. The series results in the essential skill of categorization. It ran on Babyfirst June 2007 - October 2007 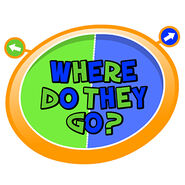