Some works have been found, but journal unconfirmed

Magik2005 was a user on DeviantArt which uploaded art based on The Simpsons. He was active until sometime between 2012-14 (posting works, but he continued to write comments until 2019). After that, most of his works became missing and some have been reuploaded by other users such as TheReedster.

He joined DeviantArt in August 2006, and since then he was very active uploading Simpsons works, most of all involving Allison Taylor and other female Simpsons characters. However, sometime between 2012-14, he stopped uploading art, while most of his works began to be lost, until fully retiring from DeviantArt on December 2019. As of August 2021, only 10 works are on his gallery and a few others were reposted, found on other sites or via Wayback Machine.

Though the exact reason why most of the gallery became lost is unclear, a user called BenderMcQueen95 (The one who made this page) has a few theories about it. One of them is that someone else reported most of these arts, another one is that DeviantArt removed these arts (Probably the most accurate theories), and another one is that Magik2005 itself began to remove most of them. 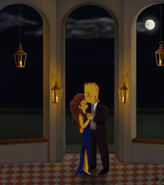 Sherri and Terri are One and The Same
A video containing some works. Sadly, it can be only watched on YouTube