Me and My Friends (Partially Found Backyardigans Pilot, 1998)

The only characters from The Backyardigans who appear in Me and My Friends are Uniqua, Pablo, Tyrone, and Tasha, in addition to scrapped puppet characters called "the Meerkats" (one of which was named Omar), whose role in the pilot is currently unknown. Why they were scrapped and weren't in the animated series is also unknown. The characters were designed by 3/Design Studio. Austin, the purple kangaroo, is absent, though whether he actually existed and was just offscreen or really was absent is unknown. Some say that this may be the reason why he was referred to as "the new kangaroo on the block" by Nelvana and Nickelodeon.

The characters' appearances aren't vastly different from that of the CGI series, besides a few minor differences:

The only known footage of Me and My Friends online is a 5-minute compilation video created by former crew members of Nickelodeon Studios for its 10-year anniversary in 2000. There is around 3 seconds of video without the original audio. There is very little information about this pilot available, and whether or not Nickelodeon still has this remains unconfirmed.

The Meerkats with their puppeteers (from left to right): Jennifer Barnhart, Rick Lyon, and Jim Kroupa

Tyrone standing near a person who worked on the pilot 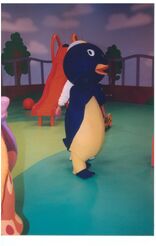 a pose of Pablo. also known as him doing the “Stanky Leg” by fans.

Uniqua’s head. you can also see Tasha without her head.

a Nickelodeon employee using a device on Tyrone.

Pablo without his head, he is also near a green screen.

Uniqua looking at a painting that is a spoof of the Mona Lisa.
Add a photo to this gallery
Retrieved from "https://lostmediaarchive.fandom.com/wiki/Me_and_My_Friends_(Partially_Found_Backyardigans_Pilot,_1998)?oldid=198347"
Community content is available under CC-BY-SA unless otherwise noted.