Michael Jordan: Chaos in the Windy City is a 1994 SNES platform action video game that was developed by Electronic Arts and published by Ocean. A Sega Genesis version was also in works, but was cancelled due to the poor sales of the SNES version. The player controls Michael Jordan on a quest to save the rest of the players for an All-Star charity game from the aliens. 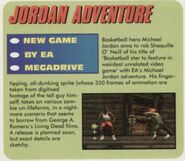 A prototype box artwork and the cartridge exists and is yet to dumped.

Retrieved from "https://lostmediaarchive.fandom.com/wiki/Michael_Jordan:_Chaos_in_the_Windy_City_(Cancelled_1994_Sega_Genesis_Port)?oldid=123740"
Community content is available under CC-BY-SA unless otherwise noted.