Monster Party is an NES platform action game setting a kid named Mark in an alternate world, populated with monsters and supernatural creatures, lots of them based on popular culture horror icons or Japanese ghost mythology.

Due to copyright issues, many of the bosses had to be changed, and most of the blood was removed due to the regular Nintendo of America censorship. In an old gaming magazine, two preview screenshots of the game were different from the final product:

As seen in the recently released Famicom version, which is the original NES prototype shown in the magazine, almost every boss was a movie reference or had a different design. A boss based on Damajin, a Japanese movie monster, and a different Medusa boss were among the changed features before the final release of the game.

In the leaked release, it is noticeable that the music which plays after the first level transitions into its gorier form in the NES release is missing in the Famicom release; even earlier versions of the game didn't have the transition at all, and different background tiles of more detailed mountains.

Images from the prototype 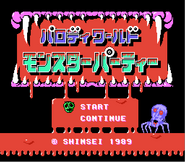 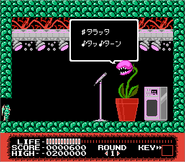 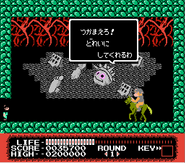 not shown: sprite flicking on the horse and occasionally on the screen 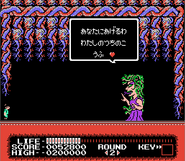 The Medusa boss
Add a photo to this gallery

UPDATE 4/22/14: http://nintendoage.com/forum/messageview.cfm?StartRow=126&catid=35&threadid=121367 <-- The prototype has been procured from the original owner by Beaglepuss, who on this page on the forum, has said he'll dump the game himself and make it public, "within the year (Hopefully a great deal sooner)".

https://tcrf.net/Proto:Monster_Party has full details on the changes

Retrieved from "https://lostmediaarchive.fandom.com/wiki/Monster_Party_(Unreleased_NES_Prototype)?oldid=122771"
Community content is available under CC-BY-SA unless otherwise noted.