Lost Media Archive
Register
Don't have an account?
Sign In
Advertisement
in: Lost pilots, Most likley to be never found, Lost Pilots,
and 11 more

Oddbods is an animated series, it has two pilots. The first pilot is found, while the second pilot is partially found

The video was posted on October 30th, 2012 on YouTube but it got blocked by Keddo Entertainment, this is the blocked video. The video was reuploaded in 2013 which is currently not blocked, you can watch it here 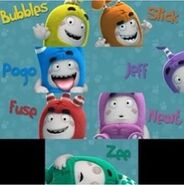 A screenshot from one of the pilots