A photo of the EMT's carrying Owen from the arena

On May 23, 1999, wrestler Owen Hart fell from the rafters of an arena in Kansas City, MO during WWF Over The Edge 1999 while doing a stunt where he was to be lowered into the ring by a harness. The harness subsequently broke, and he fell 24 meters, chest first onto the top rope, flinging him violently into the ring. The impact of the fall severely wounded him, and he later died at the hospital from blunt force trauma to the chest.

A YouTube user by the name of Chris Breseman said that he was in attendance and witnessed the fall, who said that Hart's "body folded like a fucking accordion"

The fall did not occur on live Pay Per View; an interview with Hart as The Blue Blazer that was recorded in the backstage area earlier in the day was playing as the tragedy occurred.

However, since WWF cameras were rolling at the time of the accident, footage of Hart's fatal fall exists on tape; this was confirmed in a column written by former WWF announcer Kevin Kelly in May 2013.[1] According to Kelly, the tape sits in the WWE Archive in Stamford, CT, with instructions "never to destroy, view or duplicate". Footage from the 1999 match where Darren "Droz" Drozdov got paralyzed accidentally is apparently in the archive with the same instructions.

The remainder of the event was only available online in the form of bootleg VHS recordings made during the event until the launch of the WWE Network in February 2014[2], where the event is available on the service although edited to not include the aftermath of the fall and the announcement of Hart's death by Jim Ross.

As people claim that no one recorded the fall, there are footages that were posted on internet websites but were deleted along with the accounts that posted the footage of the fall, some viewers had downloaded the footage was reposted but WWE will not allow anyone or anything post a footage of Owen Hart's fall no matter where it gets posted especially on YouTube. Not much footages of Owen Hart's fall was recorded by fans because most cameras were bulky and large in the late 1990s and were very difficult to sneak one into the show

2/29/16 UPDATE: Unfortunately, this video has been blocked by the WWE on copyright grounds. 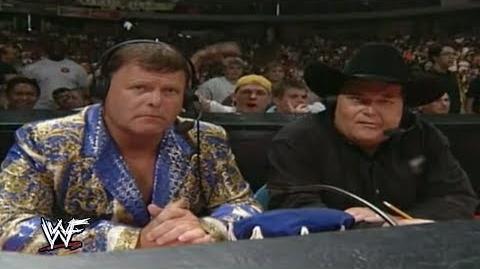 This is the only surviving recording audio from the day of the fall, over 20 years since the events and someone out here finally leaked the events. Note, it's in Spanish, so I managed to get the translation on what the commentator was saying.

UPDATE: that Dailymotion link was not the real video, but was an event that did happen where New Jack was trying to kill Vic Grimes in real life.