Peppa Pig is a British pre-school animated series. During 2002, a pitch pilot was made and pitched it to Channel 5. The whole video is found, but before it happened, there is only one piece of footage was found on an Australian promo for Nick Jr., where one clip shows where Peppa lays on the floor, giggling from the intro and at the end. Although the pilot was never aired, it was screened at a "Cartoon Forum" convention event at Snowdonia, Wales in 2002, and again at the Phil Davies interview at London Animation Club convention event in 2017. The differences from the pilot is the character Peppa Pig herself was originally meant to be described "cheeky and slightly bossy" little pig.

The pilot can be seen in this video, along with the Ben and Holly pilot: https://youtu.be/e82_FABpwE

The only HQ pilot footage

A promotional GIF from the pilot, that features Peppa jumping on muddy puddles.

Penny Pony. She would later appear as a background character in the show

Screenshot of the storyboard

Another screenshot of the storyboard 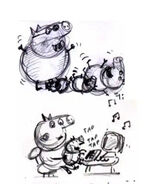 A screenshot of the storyboard

George crying in the pilot

Another version of crying George, except it's in a different angle.

Another screenshot of the storyboard

Another the picture of pilot

The pilot, but taken from another angle: https://www.youtube.com/watch?v=dlCP4L_M5p0