Per Fine Ounce is a mostly lost, unpublished 1966 manuscript for a James Bond continuation novel written by South African author Geoffrey Jenkins in the first attempt to continue the series after Bond's creator and author of the original novels, Ian Fleming's death.

Jenkins was a friend and fellow reporter with Ian Fleming in the foreign department of Kemsley Newspapers. In the late 1950s, after Fleming had become a successful author with his series of James Bond espionage novels, Jenkins approached Fleming with the idea of a Bond novel set in South Africa, and submitted a synopsis, which Fleming liked, even to the point of wishing to visit the continent with the intention of doing research for the story, but he died before this could become a possibility.

After Fleming's death, Glidrose (the Bond books' publishing company) were looking into having another author continue the series, when Jenkins approached them with the synopsis. Glidrose was slow to approve it, but did allow Jenkins to write the manuscript. Although the manuscript itself has not been found in full, the synopsis contains elements of gold bicycle chains, coffins made of Adansonia tree trunks and the supposedly cursed Lake Fundudzi. Four draft pages of the manuscript that were discovered in 2005 reveal further plot elements such as the fact that the Double-O section has been disbanded, and Bond disobeys his Chief, M by traveling on a solo mission to South Africa. Some of these elements would later surface in Jenkins' 1973 novel, A Cleft of Stars.

Despite that fact that Jenkins had been a friend of Fleming's and the fact that Fleming approved of the project, Glidrose ultimately rejected the manuscript on the basis that it was poorly written. It was once believed that Glidrose still owned a copy of the story, but the former Chairman, Peter Jackson-Smith, believes that the manuscript was actually returned to Jenkins to avoid a lawsuit. Jenkins' son David is in possession of the only 18 pages known to still exist, two of which he allowed to be shared on MI6 (a James Bond fansite) in 2010. 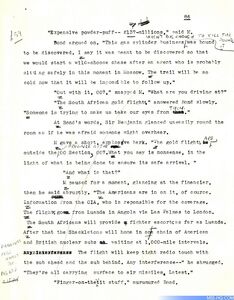 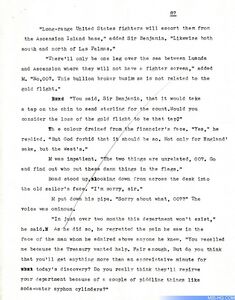 Leaked page; 2 of 2.
Retrieved from "https://lostmediaarchive.fandom.com/wiki/Per_Fine_Ounce_(Lost_1966_James_Bond_Novel_Manuscript)?oldid=27991"
Community content is available under CC-BY-SA unless otherwise noted.