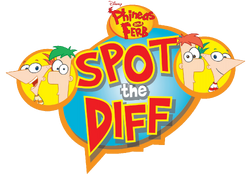 Spot the Diff, or Change-inator-inator, is the name given to a special two-hour Phineas and Ferb mini-marathon, first aired on Disney Channel US in 2008. The marathon is based around a scenario in which Dr. Doofenshmirtz has made an invention he calls the Change-inator-inator, with which he can make various changes, particularly visual ones, to certain episodes of the show. The changes are shown through specially-made promotional spots airing between each episode, with redubbed animation from "The Fast and the Phineas". As a challenge, the viewer watches the four selected episodes and their modified counterparts while keeping track of which changes are made as part of a tie-in at the official websites.

Footage of Spot the Diff has been found and is now on Archive.com or KimCartoon.com (HOWEVER it's not the best way to watch these episodes, because of pop ups on this website).

Retrieved from "https://lostmediaarchive.fandom.com/wiki/Phineas_and_Ferb_Spot_The_Diff?oldid=153204"
Community content is available under CC-BY-SA unless otherwise noted.